Cohousing projects are typically self-managed, and ours is no exception. From time to time we contract out, but typically everything from planning community celebrations to budgeting is done by resident “teams.” Decisions are made by a consensus process at monthly business meetings.

Residents of Prairie Sky voluntarily participate on one or more teams that manage the affairs of the community: 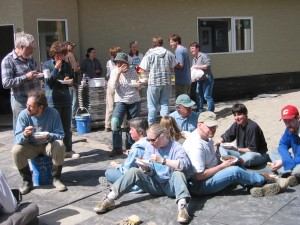 Early days of the build

Consensus decision-making is different from other kinds of decision making because it stresses group members working together to cooperatively develop a decision. Since the goal is group unity, rather than winning a majority of votes, every member is considered important and the group tries to listen and respond to each person’s needs and opinions. Because of this process of incorporating all members’ wisdom, consensus can create better decisions.

When a proposal is under an initial test for consensus, group members generally show one of two coloured cards:

All those with yellow cards are asked to speak, and the group listens respectfully to their concerns. Often, the proposal simply requires further clarification, or sometimes the proposal may be sent back to the originating committee for revision. Ideally, the proposal will re-emerge with “green cards” all around; however this does not always happen. Full consent does not mean that everyone must be completely satisfied with the final outcome. The decision must be acceptable enough, however, that everyone will commit to support the group in implementing it. 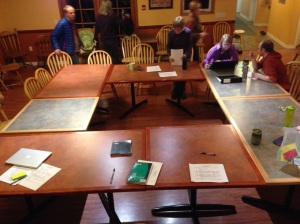 Setting up for Business Meeting

Occasionally, a member may “red card” a proposal, meaning that they stand in the way of the decision. If this occurs, then the person holding the red card is asked to become part of the solution and to work toward a decision that is acceptable to all. In this way, the consensus process strives to incorporate every voice. The process acknowledges both the validity and the importance of each contribution, leaving no residual minority to feel that a decision has been imposed on them.

Reaching consensus can often take more time initially than other forms of decision making. However, decisions will be much better implemented because all members own the decisions made, and there will not be as much time required in the future to “fix” poorly implemented decisions.